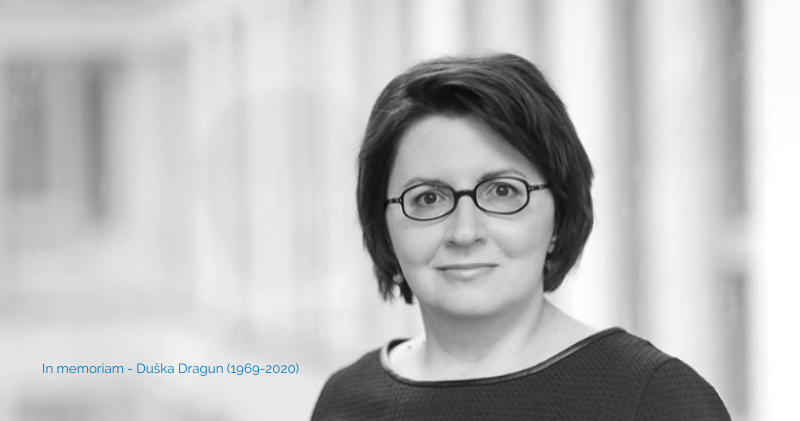 We deeply mourn the passing of our colleague Prof. Duska Dragun, who died on 28th of December 2020 in Berlin at the age of 51.

Duska studied medicine in Zagreb and started her training in Internal Medicine at the University Hospital Centre “Rebro” in Zagreb, the largest hospital in Croatia. In 1995 she started her thesis at the Humboldt University in Berlin on ischemia/reperfusion injury and worked for her research projects at the Max Delbrück Center for Molecular Medicine in Berlin-Buch. In 1999, she started her nephrology training at the Charité Universitätsmedizin Berlin and was appointed as one of the first Junior Professors at Charité in 2002. In 2007, she became full Professor for Nephrology and Experimental Transplantation at the Charité.
Duska was a well-recognized researcher and one of the international leaders in the area of humoral immunity in solid organ transplantation.

In 2005, she published the landmark article about the role of angiotensin II antibodies during allograft rejection in the New England Journal of Medicine. She was an active member of many societies and received numerous awards. For her outstanding contributions to the field of immunogenetics, Duska received the long-life honorary membership of the American Society for Histocompatibility and Immunogenetics (ASHI). Her outstanding achievements resulted not only in substantial improvements in our understanding of the pathophysiology of ischemia/reperfusion injury and humoral mechanisms of organ damage but also in better diagnostics of non-HLA antibodies. With her approach of research from bedside to bench and vice versa she was a true pioneer of translational research in transplantation.

In addition to her research achievements, Duska became founding Director of the Clinician Scientist program at Charité and Berlin Institute of Health (BIH) in 2011. She started the first Clinician Scientist Program in Germany supporting more than 250 clinician scientist fellows among all medical and surgical disciplines fostering translational biomedical research with structured translational medicine oriented curriculum and protected time for research. In 2019, she was appointed as director of the BIH Biomedical Innovation Academy.

With Duska we lost a brilliant researcher, a visionary transplant physician and a role model for young researchers, but most importantly we lost a friend with a good sense of humor, always interested in a good discussion on the future of transplantation.

We express our condolences to her family.

[credits to Katja Kotsch and Klemens Budde – friends and colleagues]