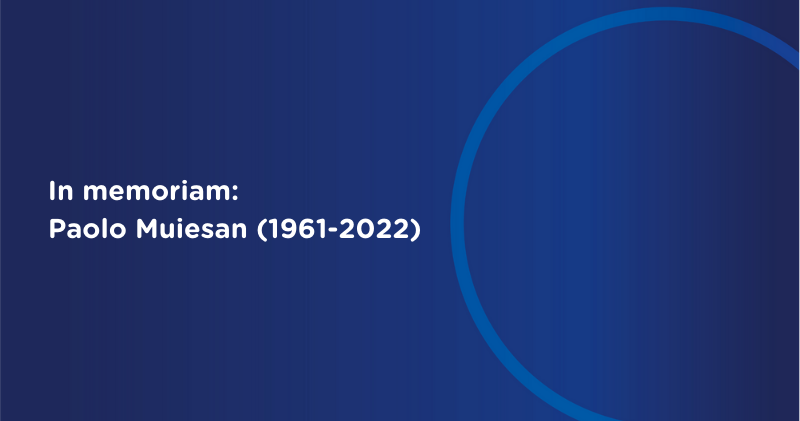 It is with great sadness that ESOT announces the passing of Professor Paolo Muiesan.

Fate has been unfair to Paolo, keeping him far from his beloved Andrea and Matteo and far from his country for such a long part of his life, then allowing him a deserved reunion and finally playing an incomprehensible game of loss and despair.

Paolo made an enormous contribution to ESOT over many decades. He joined the ELITA Council in 2007 and became secretary in 2008, a post that he held until 2012. In recognition for his contribution to ELITA, he was elected Chair in 2012. During the next four years, he steered the European liver community and represented its interests in the ESOT Council where his voice was always listened to and his advice was always sought.

Paolo spent a significant part of his career in the UK, working for many years at King’s College Hospital, where he pioneered liver transplantation with donors after circulatory death and established the first such programme in the UK. He moved to the Queen Elizabeth Hospital in Birmingham, where he expanded the living donor programme and the hepato-biliary service and had a key contribution in developing the new perfusion technologies. In recognition of his contributions, he was awarded a Personal Chair by the University of Birmingham. In 2018 Paolo returned to Italy to be closer to his family, working initially in Florence, where he led the HPB service, and subsequently as Professor and Head of the Transplant service at the Policlinico Universitario in Milan. The whole Italian transplant community looked at his return as a sign of wholly deserved talent recognition.

A strong and passionate advocate for liver transplantation, Paolo was an innovator, pushing the boundaries, embracing new developments and always searching for the next study. He was the brainpower behind the DCD transplant congress and leaves behind an immense contribution to the field, with over 300 publications and innumerable participations to global meetings.

Icon of style, handsome, emphatic, international top class professional, Paolo Muiesan achieved everything in his brilliant academic career. He stood out, however, mostly for his well-tuned balance between professional talent and humanity. His natural attitude to interpersonal relationships, fairness, positivity and wise approach to life were well recognized by the entire transplant community.

His humanity translated into a remarkable commitment to education and knowledge sharing, attracting tens of young transplant surgeons and clinicians, many of them referring to him as an absolute Master of transplantation. Paolo played a prominent role in countless courses and educational activities and acted as the link between ESOT and UEMS, where he helped shape the transplant exam boards structure.

His premature departure is a huge loss to the transplant community and to his many friends who will miss his company, his humour and his charisma.

Our thoughts are with Paolo’s family and the entire ESOT community sends the most sincere condolences to his sons Andrea and Matteo, his mother and all his beloved.