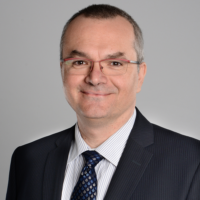 Mr. Oniscu has been appointed as Director of the Edinburgh Transplant Centre in September 2019. He has a clinical interest in liver, pancreas and kidney transplantation and laparoscopic surgery performing laparoscopic living donor nephrectomy and polycystic kidney nephrectomy. His principal research focus is organ perfusion and reconditioning, transplant outcomes and optical sensin.

A list of Gabriel Oniscu’s publications can be found by clicking here.

source: The University of Edinburgh