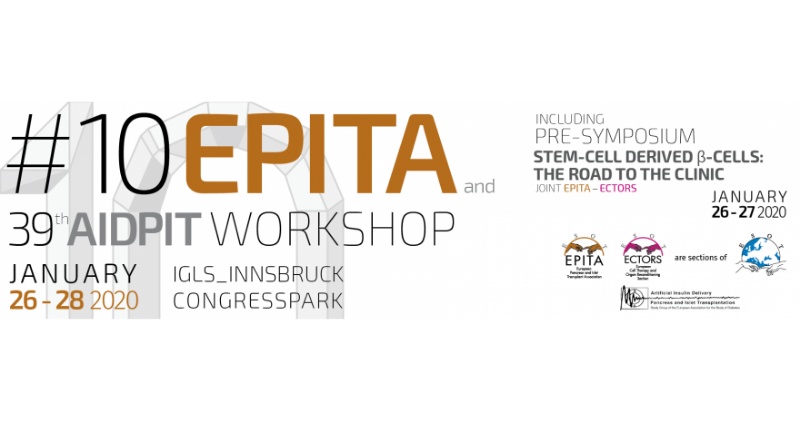 The EPITA Board is proud to announce the 10th EPITA Symposium & 39th AIDPIT Workshop, which will take place in Igls_Innsbruck from the 26th to the 28th of January 2020.

This EPITA anniversary meeting will be characterized and enriched by a series of new, additional sessions dedicated on the use of pluripotent stem cells in clinical beta cell therapy in collaboration with ECTORS (European Cell Therapy and Organ Regeneration Section).

The first trials using stem-cell derived β-cells in patients with type 1 diabetes are underway. As a community with exceptional expertise in the field of pancreas and islet transplantation, immunosuppression and monitoring of graft function the time is right to have a special focus on the “Road to the Clinic” for this novel therapy, in and outside Europe.

These additional, focused sessions will be held on Sunday, January 26. On Monday morning, January 27, a series of sessions that are relevant to to all scientists and clinicians involved in pancreas, islet and stem-cell derived β-cell transplantation, including topics such as immunological aspects, alternative transplantation sites and graft monitoring. In this way the meeting structure, lively atmosphere and scientific discussions on pancreas and islet transplantation will be preserved, while also moving into the future with novel cell replacement therapies.

Including Pre-symposium Activity on January 26 and morning of January 27, 2020

Stem-cell derived β-cells: THE ROAD TO THE CLINIC

The new sessions have been included:
– To inform scientists and clinicians about relevant aspects of stemcell derived β-cell transplantation
– To discuss the current hurdles and future challenges to implement this novel β-cell replacement therapy
– To create a networking platform for clinicians and scientists involved in stem cell biology and generation of ATMPs in Europe

Who should attend these new activities?
Medical professionals working in the field of transplantation and diabetes; basic and translational scientists in human islet biology; basic scientists in islet development and stem cell biology; scientists involved in generation of ATMP and regulatory affairs.

Medical professionals working in the field of transplantation and diabetes such as transplant physicians, surgeons and diabetologists. Basic and translational scientists in human islet biology, developmental and stem cell biology. Scientists and clinicians interested in generation of ATMP and regulatory affairs.

Travelling Information
Plane
As a member of the global Star Alliance Network, Austrian Airlines guarantees full coordination with other international airlines and timetables for optimum connections worldwide. Innsbruck has its own airport, located about 3 km from the city centre which can be reached either by bus or by taxi. Munich Airport, located some 180 km or a 2-hour drive away, presents a further option for getting to Innsbruck by plane. Direct connections to/from Innsbruck are (depending on winter-/ summer-season): Vienna, Graz, Frankfurt, Hannover, Cologne, Bonn, Berlin, London, Amsterdam, Göteborg, Copenhagen, Oslo and Stavanger. From Vienna, Frankfurt and Munich access to all international airlines. Further information: Airport Innsbruck – www.flughafen-innsbruck.at Airport Munich – www.munich-airport.de Where Igls is situated – www.come-innsbruck.at

Car
Innsbruck is easily accessible by car, with an excellent network of roads from all over Europe. You may use the highway exits A12 – Innsbruck Mitte, Ost or West or highway A13 exit Patsch and then towards Igls and congresspark. Salzburg approx. 2-hr drive Vienna approx. 5-hr drive Munich approx. 2-hr drive Zurich approx. 3-hr drive Milan approx. 4-hr drive